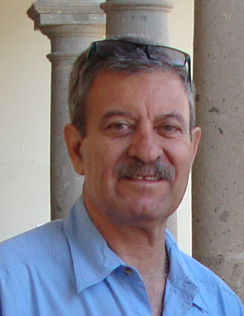 Rafael Muñoz Diaz (ramu).- Self-educated artist from Sonora Mexico. Born in the seaport of Guaymas in 1950.

Since childhood at the age of 8 Rafael started with drawings and sketches of seashore and mountain surroundings in his native Guaymas. He was inspired and oriented by Julian Martinez a renowned Spanish/Mexican painter and sculptor (“El Zapata” monumental bronze sculpture located in Toluca Mexico is considered the tallest in Latin America) which Rafael´s father supported as Julian´s patron in the late 50’s and beginnings of the 60´s, in Guaymas. During his prep school and throughout his formal university education ramu took part in his university´s cultural activities designing and painting scenery backdrops for theater and musicals .

On and off he came back to oil painting and, at one time, experimented primitively with gravures. He eventually left this artistic work and returned to his professional career and practice as a communicator, designer and marketing consultant while living in Monterrey, México for more than 30 years.

In 2004, ramu comes back to painting and now, living in Cuernavaca, Mexico since 2009, he retakes it with a greater and more vivacious strength.

CRITICS NOTE.-
“His simple technique, acrylic on canvas is temperate and simple with impetuous color sharpness and detailing. ramu´s color palette is proper and gives a feeling of vitality and joy. For viewer, it establishes a jovial state of mind without conceptual complications or interpretations. His composition is clearly resolved and is well balanced in form and color. He paints over pieces of substantial size in order to freely expand his creativity. His work is not the result of accident but of previous graphic knowledge incorporating his two worlds: his professional background and his artistic keenness entailing intellect with emotions”.
Overall, ramu´s work is pleasing and exciting showing us his unique talent which was dormant for more than 40 years.